Where to find an ideal binder?

Suberbinder is a brand that offers every wood-based panel manufacturer to introduce a new, innovative technology that can replace urea-formaldehyde or phenol-formaldehyde resins and similar substances harmful to human health and the environment.

Using the technology developed by us, birch outer bark can be processed into a very valuable binder, which has excellent properties and could replace the binders harmful to health, used in the manufacture of plywood, particle boards, furniture, etc.

Birch for use in the woodworking industry is grown, on average, for 70 years. For trees of this age, on average, 12.5% of the mass of veneer logs is formed by bark.

As a binder, suberinic acids and the ligno-carbohydrate complex are used, which together make up 70% of birch outer bark.

About 105 thousand t of absolutely dry birch bark could be obtained, which is now burned in boiler houses to provide thermal energy.

Thus, in Latvia alone, it would be possible to obtain about 20 thousand t of absolutely dry binders, as well as additional raw materials that can be realized.

The by-product that may occur is an aqueous solution of potassium nitrate or potassium sulphate, which can be used as a mineral fertilizer. 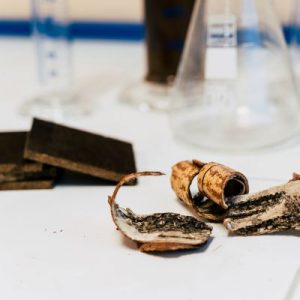 Suberin is a lipophilic (hydrophobic) macromolecule that is found in the cell walls of the outer layer (bark) of many plants and protects the plant from environmental conditions and pests. It is a complex polyester composed of linear, polyfunctional long carbon chain (predominantly C18) fatty acids (suberinic acids) and glycerol, which, in turn, in the birch outer bark, is covalently linked to lignin monomer-like polyphenols, which give it a dark colour. When depolymerization of suberin in an alkaline medium is performed, a mixture of various suberinic acids is obtained.

Suberinic acids belong to carboxylic acids, which are predominantly long (C18) α and ω-bifunctional saturated and unsaturated fatty acids, characterized by high adhesion to wood after heat treatment. Depending on the isolation conditions, the chemical structure and mutual ratio of individual suberinic acids may change. In production of wood-based panels, a mixture of suberinic acids can be successfully used.

The complex of ligno-carbohydrates consists mainly of lignin, cellulose, monosaccharides and polyphenolic compounds. Lignin is hydrophobic cross-linked aromatic polymer. The degree of polymerisation is difficult to measure, since the material is heterogeneous. Different types of lignin have been described depending on the means of isolation.The ligno-carbohydrate complex is relatively low-value, but when precipitated together with suberinic acids, a binder is formed, which works great in the production of the wood-based panel materials. The ligno-carbohydrate complex acts as an interphase modifier, which increases the adhesion ability between the binder and the filler; therefore, it is not isolated as a separate by-product, but is used together with suberinic acids as a binder in the production of wood-based panels. 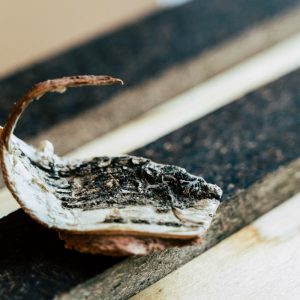 The white outer layer of birch bark in terms of its chemical composition, is a unique natural material containing an unusually large amount (~30-35% of the absolutely dry mass) of valuable extractives. The basic mass of the extractives (~75% of the absolute dry mass) is composed of an individual chemical compound lup-20 (29)-en-3β,28-diol or betulin. In recent decades, for betulin and other compounds of the triterpene class of similar structure present in extractives, such as betulinic acid and lupeol, various anti-cancer properties have been found and improved, and great progress in the fight against the HIV infection has been made.

Following the technology developed jointly by the Latvian State Institute of Wood Chemistry and JSC “Latvijas Finieris” (Latvian Veneer), the ethanol extract of birch outer bark has antioxidant, emulsifier and preservative properties, which are ideal for the preparation of natural cosmetic creams and other beauty products, and the birch outer bark extract has scientifically and clinically proven wound healing properties.

The presence of extractives in the binder does not impair its quality and adhesion ability, but the production of several products from birch outer bark and their marketing would allow optimizing costs.


In the process of production of the suberinic acids binder and betulin, a by-product arises – a solution of potassium nitrate or sulphate, which are widely known compound used for soil fertilization. The largest producers of mineral fertilizers industrially synthesize potassium nitrate and sulphate, but in the process of producing suberinic acids a by-product is a perfectly suitable soil fertilizer.

Suberbinder experts will answer all your questions about the production of the suberinic acids binder, the use of technology, efficiency and economic benefits.